Esperanza is a supporting character in the film Spirit: Stallion of the Cimarron and is the mother of the titular character Spirit. She also appears as a primary character in the book Esperanza, where her origins and how she met Spirit's father Strider is revealed.

Esperanza is a palomino mustang mare with two white stockings on her back legs, and a white blaze on the center of her face. She has a strong, slim build and is muscular, with a beautiful delicate head and curved back.

Esperanza is a free-spirited, gentle, and caring mare and mother. She has a quiet confidence in herself and a knowledge of the range that encourages the other mustangs to follow her.

In the film, Esperanza first appears in labor as she brings a foal into the world, which turns out to be a colt: Spirit. As he and the other foals grow, she and the herd put up with their crazy antics, Spirit's especially, until he becomes an adult and takes over the herd.

She is very proud she has raised a strong and responsible leader, but something strange comes to the land that night, after Spirit rescues the two foals from a cougar. Beckoned over by her son, she wants him to ignore it and stay, but Spirit insists.

Her son returns, seemingly untouched, believing he lost the humans, but they all flee in fear when the humans catch up to Spirit, who has lead them straight to his herd. She tries feebly to rescue Spirit when he is finally roped, but Spirit stops her and tells her to turn and take the herd to safety. She turns to the herd in sadness to lead them away, leaving Spirit captive.

She is last seen happily approaching him when he returns with his new mate, Rain.

As a filly, the Lead Mare and Stallion die, leaving the Herd decimated. Her mother, Alma, takes over and attempts to get to better terrain with the six other horses. They had no stallion, thus they were more likely to split up, so six turn to three: Midnight, Aspen, Willow. Unfortunately, Alicia, Esperanza's best friend, is amongst the mares that separate.

Esperanza is particularly worried about Midnight, an older mare that slowed them all down. Alma decides to integrate with a larger herd for more protection. Here, Esperanza meets various horses her age, and the one named Strider takes a particular liking to her. He makes the filly suspicious, however, and she avoids him as much as possible. He protects her from possible danger, however, and Esperanza realizes that he has no intentions to harm her. They become inseparable friends. A violent thunderstorm shakes the land and scatters the herd. The golden filly and black colt are alone. They set off to find a place of their own where they can live in freedom together. As they travel, they learn to deal with one another's flaws. Strider is proud and sometimes overprotective. Esperanza is bossy and a bit suspicious. Both of them are stubborn and like to get their own way. Nevertheless, they discover that they can work together in order to survive. Strider's protectiveness saves Esperanza from harm more than once. Esperanza's bossiness finds Strider water and grazing land.

As they endure many hardships, the two grow even closer. They are affectionate, loving, and playful toward one another, but also fiercely inseparable. Eventually, they find a wide valley that they decide to call home.

Looking for her newborn 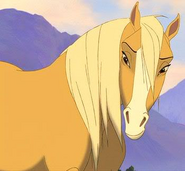 Looking for her son

Running in the snow 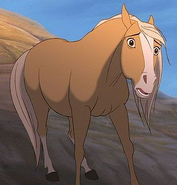 Looking sadly to the sky 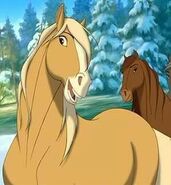 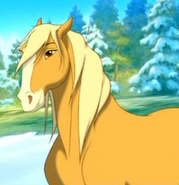 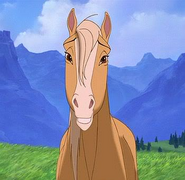 With her mate Strider
Community content is available under CC-BY-SA unless otherwise noted.
Advertisement