Harlan Grayson is a single rancher and horse wrangler living on a ranch near Miradero. His encounters with Lucky and the PALs have portrayed him as an antagonist and nemesis to the Prescotts and their friends. He refers to Lucky as a "mouthy brat" and is wary of interference in his affairs by the PALs. Grayson is selfish, ruthless, misanthropic, and sometimes disrespectful to people and horses, but law-abiding and reliant on the law to preserve his interests.

Grayson's father Merle was a judge, but had died by the time Lucky returned to Miradero,[1] killed by an escaping Butch LePray during a jailbreak.[2]

Junipero was neglected and mistreated under Grayson's ownership prior to Lucky and Turo freeing the horse from Grayson's property. Grayson suspected but could not prove Lucky's role in the disappearance of the horse; the dispute was resolved when Grayson agreed to trade Junipero to Turo for some tack that Turo had already been contracted to make for Grayson.[3]

Despite Grayson being beaten to the finish line by Lucky and Spirit, Mr. Granger was compelled to declare Grayson and his horse Xerxes the winner of the Tarrell Circuit horse race, Lucky having been disqualified by her gender. Grayson was awarded the Tarrell Circuit trophy.[1]

Spirit's performance in the race prompted Grayson to offer to buy Spirit from Lucky for $1,000. When Lucky refused and insulted Grayson's offer, declaring that Spirit was a free horse, Grayson hired men to wrangle Spirit from the wild, and Grayson sent Spirit to be sold at auction in Cannon City.[1] Spirit sold for $1,000. Spirit escaped from his new owner and, with help from Mixtli, an emancipated 16-year-old Tuckapaw, Spirit made his way back to Miradero and Lucky.[4]

Grayson used the proceeds from the sale of Spirit to buy the fishing hole long used by the PALs and ordered them never to return there, threatening them with a trespassing charge. When Grayson caught Mixtli on the land, he pointed his gun at Mixtli's horse Crow, prompting Mixtli to hit Grayson, giving Grayson a black eye. Grayson had Mixtli detained by the Sheriff, who arranged to have Mixtli returned to his reservation near Pine Forks. Noting that he had a relation there — or, as he claims, "sweet old Auntie Peg" — to whom he owed a visit, Grayson personally attended the prisoner transfer on the 1:10 to Pine Forks, but Lucky and the PALs succeeded in their plan to rescue Mixtli from the train and reunite him with Crow.[5]

When a landslide on Grayson's land dammed the river, cutting off the supply of water to Miradero and Spirit's herd during a dry-season drought, Grayson barreled water from the dammed-up side of the river and carted it into town to sell at a price of five dollars (a day's wages) per bucket. Grayson told the townspeople the water was from his well. The PALs discovered Grayson's subterfuge and undammed the river, retiring Grayson's price gouging scheme, but not before he had turned a tidy profit, and with no legal repercussions for Grayson, since his sale of the water was lawful.[6] 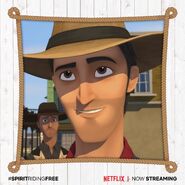