Javier is a Mexican teenage trick rider and cowboy who befriends Lucky and becomes her love interest/boyfriend. He is highly skilled, but also humble, helpful, and plainspoken. His primary language is Spanish.

Lucky first met Javier when he came to Miradero to perform in its fiesta's charreada. She asked for his help learning some horse-riding tricks, including the one-legged balancing pose struck by her mother on horseback on the circus poster, which Javier identified as la volada. Maricela took an interest in Javier too, and competed with Lucky for his affections, showing off her skills speaking Spanish and dancing with him.[1]

By the time of Turo's midnight Harvest Hunt, for which Javier returned to Miradero to participate on the boys' team, Maricela had moved on to being interested in Lucky's Cousin Julian, who called Javier "Jay". Although Julian taunted Lucky throughout the competition, Javier remained a gentleman, frequently offering to help the girls.[2]

The day before an earthquake struck Miradero, Javier spent a morning in Miradero helping Lucky work on her horse-riding tricks, in the process literally sweeping her off her feet while showing off his skills. He revealed that he would be competing in a rodeo the following day, but it was to be held all the way in Silverlode, and Lucky's father did not permit her to skip school to go. Javier promised to help Lucky with a new trick when he came back.[3]

Javier accompanied the PALs and Mr. Granger on a mustang drive from Miradero to Rancho Conejo, during which he injured his leg, requiring Lucky to make a splint for him and give him stitches. She apologized for the "weird scar" he was likely to have. He told her he thought she was a real vaquera now, and held her hand.[4]

Later that year, Mayor Gutierrez invited Javier to lead the New Year's Eve parade in Miradero, and Javier and Hacheta spent many months perfecting horse line choreography for a charro dance. Javier invited the PALs to participate, but required they spend New Year's Eve day practicing. Lucky, busy fulfilling each one on her list of resolutions, had too little practice and bungled the dry run performed before the parade for the Mayor. Her missteps knocked over the other horses like dominoes and sent Javier into a table of pies, which went flying, ruining them all. Javier was upset with Lucky, and she took herself out of the parade, angering him further. When Lucky returned later that night for the New Year's Eve party, Javier forgave her, and when she confessed to him how much she liked him, he said that he liked her too. The clock struck midnight and they kissed. Afterwards, Javier wished Lucky a happy New Year.[5]

Javier is voiced by Andy Aragon. 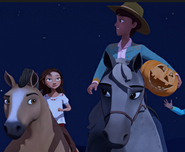