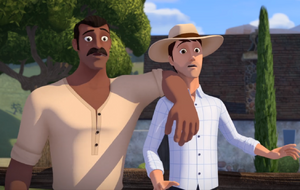 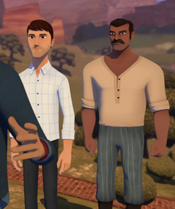 After the Tarrell Circuit race in Miradero, the mesteñeros accompanied Grayson to the Prescott house to offer to buy Spirit. When Lucky refused Grayson's offer, the mesteñeros assisted Grayson in capturing Spirit and taking him away to be sold.[2]

The larger mesteñero thought that his horse caught the frontier flu because "his eyes were all crusted and goopy" one morning, but, in a town meeting at the schoolhouse, Mr. Granger informed him that horses could not get the flu.[3]

Mr. Granger called the smaller mesteñero "Dan" when rescuing him from a burning building after the earthquake.[4] Dan returned to the Granger ramada accompanying an interested horse buyer when Mr. Granger was holding Mixtli's horse Crow for sale.[5]

In "Lucky and the Unbreakable Spirit", the mesteñeros were voiced by veteran voice actor Jeff Bennett.

The character designs for the mesteñeros, and "Dan" in particular, are often cloned repeatedly to fill in crowd scenes for set pieces such as the Tarrell Circuit race and the Cannon City Bi-Annual Equine Auction. A shot at the end of the Tarrell Circuit race shows eight different "Dans", some of them having minor variation in clothing and skin tone, others being completely identical.