Prudence "Pru" Granger is one of the three main characters of Spirit Riding Free. She is the horse trainer of the group. Her father, Al Granger, is a horse wrangler and the largest purveyor of horses in Miradero. Pru is best friends with Lucky and Abigail and has a mare named Chica Linda.

Pru has a competitive and headstrong nature. Pru is just slightly younger than Lucky, her twelfth birthday having coming some months after Lucky's in the summer.[1] She cares about her friends and is always there for them. Pru had a fear of public speaking and performance, and, although she enjoys singing, had difficulty doing so before a crowd.[2][3]

Pru has owned Chica Linda's saddle, made by Turo, since she was eight years old.[4]

Pru is often scolded by her father, even when the trouble is not entirely Pru's fault, as when Spirit broke a hole in the wall of her father's barn.[5]

Besides her parents, Pru appears to be an only child, and doesn't seem to have any other relatives in Miradero. Lucky's Aunt Cora attempted to help her deal with these issues on several occasions.[2][3]

Pru also had sour feelings for circuses stemming from an embarrassing incident involving clowns that occurred when her father took her to a circus in Cannon City for her fifth birthday.[6][7] Pru eventually managed to kick her stage fright and her distaste for circuses when she—at first unintentionally, then later intentionally—performed a comic act with Abigail's horse Boomerang for El Circo Dos Grillos.[8]

She turns twelve in Lucky and the Not-So-Secret Surprise.

Pru is voiced by Sydney Park. 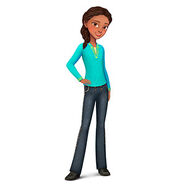 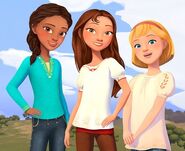