Rain is the deuteragonist in the 2002 film Spirit: Stallion of the Cimarron, and Spirit's mate. She belonged to the Native American Little Creek at first but was released by him to live free with Spirit at the end of the film.

Rain is a beautiful sorrel tovero paint mare with a slender, well-rounded body and a roman nose. Her eyes are crystal blue and her mane and tail are pale blonde. Her hooves are light brown. She also had an eagle feather in her mane until Little Creek removed it at the end of the movie as a sign of letting her go.

Rain is a domestic horse whose life takes a sudden turn when Spirit comes into her life and eventually finds his way into her heart. She is clever, tricky, sassy and can also be quite stubborn, with a caring heart who, despite her rather playful sense of humor, knows when to be serious especially when the situation calls for it, and on top of that is also known to be very dedicated and extremely loyal to those she loves, sometimes even, as Spirit would put it "In a stubborn, irritating kind of way."

Rain was raised by Little Creek of the Lakota Tribe and is very attached and dedicated to him because of this, as is very evident throughout the entire film. She first meets Spirit when he and Little Creek escape from being held captive at a U.S Cavalry settlement.

The next day, Spirit, obviously taken away by Rain's beauty, tries to win her over, but she ignores him, choosing to play with Little Creek instead. Spirit is very surprised at the close relationship Rain shares with the human. But when Little Creek tries to ride Spirit, the stallion lashes out at him resulting Rain to come and passionately defend her human. Thus, Little Creek comes up with an idea and ties Rain and Spirit both together with rope and has her show him a thing or two on how to behave, as well as their world.

Spirit is at first hot-headed, wanting desperately to run off back to his herd. But Rain outwits him with her charms, and he decides to let her show him her world. Gradually, the two horses warm up to each other and eventually fall in love. Spirit feels his heart is torn between Rain (who herself is torn between her homeland and Spirit) and the homeland that he wants to return to. When Little Creek lets Spirit go the first time around, Spirit wants Rain to come with him. At first, she's absolutely scared of abandoning her home as well as Little Creek. But before Spirit can persuade her, the Lakota tribe is attacked by the U.S Cavalry and Rain, who had leapt into the fray to aid Little Creek, is severely wounded by The Colonel when she desperately shields her human, taking a gunshot on herself that was aimed at him. The force of the shot knocks both Rain and Little Creek (who was mounted on her) backwards in the river and Spirit leaps after them in order to save her. He reaches Rain in time and struggles to get her out of the water, but before he can pull her to safety the two go over a waterfall.

When Spirit makes his way to the bank, he sees that Rain has already washed up on shore, wounded and barely alive. He lies down beside her and comforts her, resting his head on her shoulder and hopes and prays for her recovery. After several hours, they're discovered by the army, who capture Spirit to make him a draught horse by Cavalry Officers. They leave Rain behind, believing that she won't make it alive. As Spirit is forcefully ripped away from his beloved mare, Rain passes out. Little Creek sees Spirit being hauled away and runs over to Rain to try and comfort her. He quickly puts together that Spirit not only saved his life but Rain's as well, so he sets out to find Spirit and repay his life debt.

Upon returning to the Lakota Tribe, Spirit, at first feeling saddened in believing Rain had died that night, is ecstatic to find she is both alive and well. She had been cared for in the village and has fully recovered. Rain too is extremely happy to be reunited with her stallion and the two share a sweet reunion. Little Creek realizes Spirit should never be without her and decides to let Rain go with him. The loyal mare is very reluctant to leave her human at first but Little Creek insists by saying, "You will always be in my heart." And so after Little Creek says his goodbye to both Spirit and Rain, she leaves with the wild stallion and returns to his homeland to live out her days with him, his herd and his mother, Esperanza. 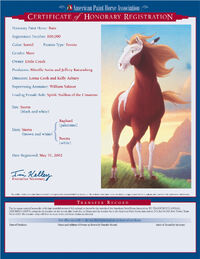 The reasons why they decided to make Rain an honorary member is because of the protagonist and exposure this breed, the American Paint Horse, had in the movie. Not much is known about her past but many people on the internet have created their own ideas of her history in the form of fanfiction (non-canonical stories), drawings, and videos.

"Although she may only be an animated version of a horse, in her own way, Rain has exemplified the breed standards people have come to recognize in a Paint Horse," said American Paint Horse Association Executive Secretary, Jim Kelley.

There were two copies made. One copy of this certificate is displayed at Dream works Studios in California and the other is kept at the American Paint Horse Association Heritage Center in Forth Worth, Texas. [2] 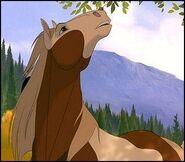 Rain under a tree

Rain up the mountain

Rain showing her World to Spirit

Run away from the crazy horse, Rain!

Why Rain you're trying to seduce me

Spirit reassuring Rain that they'll figure this out...

RAIN AND LITTLE CREECK RUNNING FOR THE COLONEL

Rain wounded with Spirit comforting her.

Rain running in the desert

Rain and Spirit with the herd 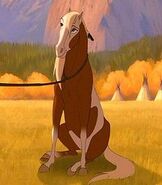 Rain wounded with Spirit comforting her.

Rain with dam and sire (mum and dad)

Rain in pain or discomfort.