This article is a stub. You can help Spirit Wiki by expanding it and improving existing text.

Sierra was a brown and white mare. She is the daughter of Bonita and Raphael, mate to Storm, and mother to Rain.

Sierra is a brown mare with patches of white all over her body and her legs. She has a white and gray muzzle. Her neck is finely arched, and her mane and tail are long and flowing. She has beads braided into her mane and two wavy lines of blue paint on her hip.

Sierra is in the book called Sierra: Spirit Of The West by Kathleen Duey. She is Bonita and Raphael's daughter and lives with her herd, which is led by a stallion named Shadow and a mare named Tally. All is normal until a stallion named Fuego suddenly takes over. To avoid the growing tensions, Sierra begins to distance herself from her herd, and continuously gallops off on her own. Eventually, she ends up getting separated from the herd and is forced to brave the wilderness alone. Storm, a Native American-owned stallion, finds himself reluctantly following him. Serra is surprised by the storm, so it's a lesson. She must also suspend the scents of smoke and humans, but then some of her war brake is accidentally stolen. Sierra gradually learns to trust Storm. This causes Sierra to form a deep love for him. Storm and Sierra become more affectionate with each other, often cuddling and refusing to leave each other. Sierra later realizes that she carries Storm's foal. Storm takes her home, and the natives of them try to tame her, but she is cautious. The Indian Call Little Colt Logo Food, food and mind - eating breakfast with a storm. Soon, Sierra realizes she's kind of a herd with Storm and the Indians. At the end of the book, she gives birth to Rain. 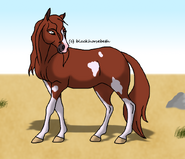 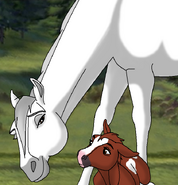 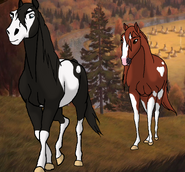 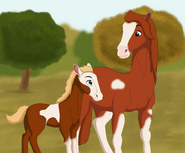