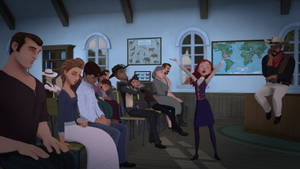 "Smile" is a favorite song of Maricela. She sang it as an "inspirational song" in a town meeting in the schoolhouse when Mr. Granger announced an outbreak of the frontier flu to the townspeople of Miradero, and again to herself later the same day while traversing the frontier during a blizzard.[1] She also performed it in school, and for the PALs outside by the train station, as part of story about her "enchanting".[2]

The song is unrelated to the Charles Chaplin song of the same title.