This article is a stub. You can help Spirit Wiki by expanding it and improving existing text.

Spirit Jr., better known as Spirit, is a wild buckskin mustang stallion who has shared a close bond with Lucky since Lucky's return to Miradero at the age of twelve. He is the male protagonist of the show. Lucky named Spirit because he was a horse of fiery independence whom no one else had been able to tame, despite attempts by Al Granger and his mesteñeros.[1]

Spirit Jr. is the son of Spirit from Spirit: Stallion of the Cimarron and Rain.

Spirit shares a resemblance with his father, and likewise is a Kiger Mustange. Spirit Jr. is the most muscular horse in the series and has his father's buckskin coat, black legs, dark brown mane and flashing brown eyes. However, he also has his grandmother's white blaze, as Rain doesn't have a blaze due to her being a paint.

Spirit's personality is like his father's; wise, kind, brave, stubborn, protective and loyal. He loves his friends and will go to great lengths for them. In coincidence, he and his father both share the same name. Mr. Granger had said that the horse has a lot of spirit, then Lucky had named him Spirit because of his determined personality.

Initially, Spirit was a wild horse. He disagreed with Mr. Granger to be ridden on, or accompanied, and refused to eat anything.

Even while accompanying Lucky and the PALs on their adventures, Spirit protected a wild herd of mustangs that range outside Miradero.[2] When Lucky ran away from home to join the circus, Spirit ceded his role with the herd to the rival stallion Smoke,[3] and did not immediately rejoin the herd upon returning to Miradero with Lucky later the same summer.[4] 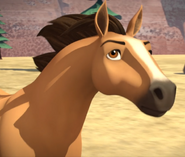 Spirt get taken away