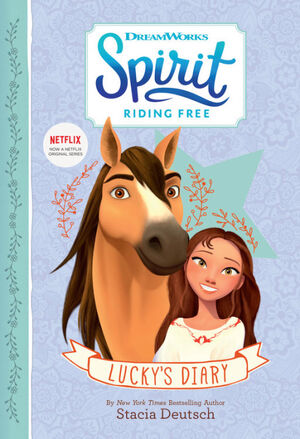 Spirit Riding Free: Lucky's Diary is a book by New York Times bestselling author Stacia Deutsch, first published April 3, 2018 by Little, Brown and Company. Interleaving "diary entries" written by Lucky in the first person with chapters told in narrative form, the book chronicles a summer camp enterprise conceived by the PALs to earn money. The events of the book cannot be reconciled with the timeline of the TV series.

After the last day of school before summer vacation, the PALs give their horses a "spa day", but it ends badly when a crystal bubble-bath bottle belonging to Aunt Cora is broken, prompting Aunt Cora to tell Lucky that she will need to spend the summer earning money to replace it.

Lucky beseeches Mr. Winthrop for employment, but he turns her down, after she already goes looking at the bank and the library. Her father turns her down for a railroad job as well. Abigail offers that Lucky can help babysit Snips, but that doesn't pay anything. Pru indicates that her father is sending her to Rancho El Paseo for the summer to help his cousin Raymond with his new ranch.

Lucky hits on the idea of starting a day camp for the town's children, which she dubs the "PALs Adventure Camp". She prices the camp at one dollar per child for the summer. Mr. Granger releases Pru from her obligation to Rancho El Paseo. The PALs make flyers to advertise enrollment and set up a sign-up booth in front of the general store. Among the campers signed up are Snips, Bianca, and Mary Pat; new-to-town railroad workers' children Lilly and Lester; and Maricela's younger second cousin Stella. Turo enlists as a helper.

On the day of sign-ups, Cousin Julian arrives in town, with his mother's permission to stay the summer on the condition he find gainful employment, and with his younger brother Oliver in tow. Julian offers to pay the PALs double their enrollment fee to take Oliver off his hands, but insists that Oliver must approve of the camp before he tenders the two dollars.

At dinner at the Prescott house, Julian volunteers that he is paying Oliver a nickel a day to remain silent until it can be determined whether he really finds the camp to be fun. This irritates Lucky, but poses a challenge to the PALs: get Oliver to have enough fun at camp to speak.

The first day of camp includes a scavenger hunt, made intentionally easy, in which all teams are declared a winner. After Julian submits that Oliver found the day boring, Lucky proposes the PALs switch up the camp concept, to a "PALs Summer Adventure Horse Camp", with horseback treasure hunts and roping and tracking exercises.

At the end of the first week, after Oliver lobs an apple at a street vendor, getting Spirit in trouble in the process, he begins talking, and announces his verdict, that the day camp is boring. The PALs decide to run an O-Mok-See to liven things up, but Oliver badmouths the idea.

Over the weekend, Julian announces his true intention, to steal all the PALs' campers for his own camp, and to have the PALs hand over their enrollment fees, so he can buy the bottle from the general store that Lucky needs to recompense her aunt. The PALs stop him from taking the children to a rocky outcropping by promising him that he can have the campers on Monday afternoon, after their O-Mok-See. Whomever the campers choose as the best will win their fees and the bottle.

Before the O-Mok-See begins, Julian distracts the PALs with cookies, delivered by Aunt Cora, while he washes off the war paint that the horses had been decorated with for the events. They repaint the horses, and the O-Mok-See appears to be a success, with campers agreeing to finish it rather than going on a treasure hunt with Cousin Julian. Then Oliver vanishes, and after the PALs deduce that his real problem all along was that he was afraid of horses, the campers find him at the dangerous rocky outcropping, hanging precariously near the top. The PALs ride carefully to the top so as to avoid causing a rockslide. While venturing down toward Oliver with a rope, Lucky triggers a rockslide that threatens the campers below. With help from Spirit, Lucky rescues Oliver from danger, and Oliver agrees to return to the PALs' adventure camp.

New children sign up for the camp, giving Lucky enough money to purchase the bubble bath, but Julian buys it for her anyway with his own money. Lucky helps Oliver overcome his fear of horses. Upset that he abdicated his duty to look after his brother, Aunt Cora forces Julian to work for Mr. Winthrop serving ice cream. The book ends with the PALs ready to compete in the O-Mok-See themselves, on their own horses.