Spirit Riding Free: Lucky and the Mustangs of Miradero 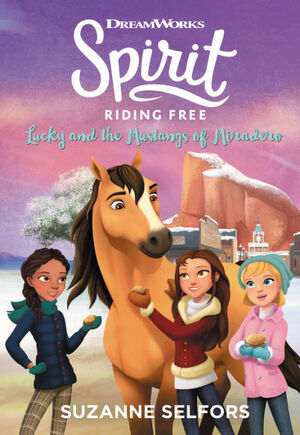 Spirit Riding Free: Lucky and the Mustangs of Miradero is a book by children's author Suzanne Selfors, first published October 31, 2017 by Little, Brown and Company. Unlike the author's previous book, Spirit Riding Free: The Adventure Begins, the book is not an adaptation of any episode of the Spirit Riding Free TV series, but instead details events of Lucky's first winter in Miradero, between mid-autumn and the beginning of spring, corresponding roughly to the time period covered by the episodes "Lucky and the Harvest Hunt", "Lucky and the Christmas Spirit", and "Lucky and the Deadly Blizzard", but without mentioning the events of those episodes. The book in particular details the struggles of the residents of Miradero and Spirit's herd to survive a harsh winter, including a blizzard.

One detail revealed in the book, not given in the series, is the identity of Lucky's home city as Philadelphia.

On October 30th, Lucky's family attends the Harvest Festival, Miradero's largest event, and one for which the whole town takes off work. Maricela is the Harvest Princess for the third year in a row, and after her father, Mayor Gutierrez, declares the festival open, Pru and Abigail find Lucky in the crowd, and the PALs participate in the festivities. At the conclusion of the festival, Miradero Mel, a weather-predicting pig, refuses to come out of his "house", signaling a severe winter.

Lucky gets a new Boxcar Bonnie novel from her city friend Emma, Boxcar Bonnie and the Missing Mustang. Spirit abandons Lucky to join his herd. Aunt Cora begins to worry that a difficult winter might come and becomes anxious about preparation. Althea tries to hook Jim Prescott up with her sister in Boston.

Miss Flores assigns a winter-themed group project and puts the PALs and Maricela in a group together. Maricela proposes a topic of winter fashion, while the PALs are more interested in the winter habits of wildlife, like Spirit's herd. Pru refuses to concede the topic to Maricela, believing that Maricela cheated to win previous competitions, like being selected to give a Founder's Day speech, or winning the prize role in the school play. Maricela holds a grudge against Pru for taking Abigail's friendship away from her some years ago, and believes it acceptable to do anything to beat Pru, even cheat and rig competitions.

Differences between the book and the show

Characters mentioned in the book but not on the show

An unabridged audiobook edition, read by Saskia Maarleveld, was published the same day as the book and is available on CD and on Amazon's Audible service.