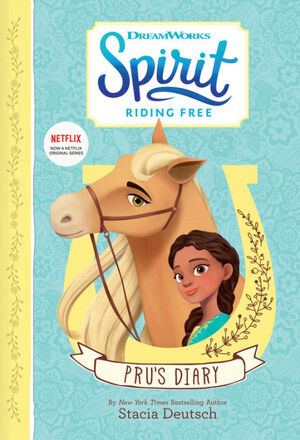 Spirit Riding Free: Pru's Diary is a book by New York Times bestselling author Stacia Deutsch, first published July 3, 2018 by Little, Brown and Company. Like the author's previous book, Spirit Riding Free: Lucky's Diary, the book intersperses "diary entries" written by Pru in the first person with chapters told in narrative form, chronicling part of the summer the PALs spent traveling with El Circo Dos Grillos, corresponding to the period between the episodes "Lucky and the No-Good Outlaw Butch LePray" and "Lucky and the Big Goodbye".

Just short of four weeks after travelling with the circus (i.e., in mid- to late-July), after Pru and Boomerang have developed their clown act (and hence after the troupe's run-in with Butch LePray), Pru is homesick, and cherishes an encouraging letter from her father comparing her to a sturdy-legged foal. The circus stops in Durango City, a small town in a valley between two mountains taller than Pru had ever seen. While setting up for a show, Pru is taunted and belittled by Catalina, a young clown performing in a competing traveling circus called Circus Libre. Pulled away by the other PALs, Pru fixates on proving that El Circo Dos Grillos is the best act on the frontier. Abigail, Lucky, and Solana make wishes on a green unicorn that Abigail says she spots in the mountains. Despite the others' urging, Pru makes no wish, but lies and says her wish will stay a secret.

On the way to the circus's next performance site, Triple Creek, Fito and Estrella decide to participate in a traveling circus "exhibition festival" in Low Shores. Pru feels pressure to enhance her act, and brainstorms ideas with the other girls. Arriving in Low Shores, Fito lets the girls explore the town, which is alive with celebration as all of the circuses get set up in a nearby meadow. On the way into town, Pru again encounters Catalina, who mocks her and puts down her circus. Pru attempts to defuse the tension with Catalina by noting that the festival is not a competition, but Catalina informs Pru that a newspaper reporter named Lydia Sebastian will be reviewing the acts. The girls visit with performers of the other circuses, including the Circus of the South, the Russian River Circus, the Mexicali Circus, the purple-tented Circus on Wheels, a Grecian trapeze group, acrobats from India, tumblers from China, animal trainers from Italy, and Amazing Animals, a circus with no human performers. Pru sees a frowning Catalina alone in a mid-sized tent, looking down at something in her hand, but is pulled away by Lucky.

The next morning, Pru writes her parents a letter, but forgets to mail it, and it disappears from Boomerang's saddle-bag. During her allotted time in a practice tent, Pru tries to teach Boomerang to bang a drum with his tail, but Boomerang is disinterested. Spontaneously, Chica Linda shows she can bang the drum with her hooves, but flees the tent when Pru tries to persuade her to play for a circus performance. Chasing after her, Pru spies Catalina laughing with a woman with a notepad—evidently buttering up the reporter Lydia Sebastian. Later, Pru snoops outside of the Circus Libre tent to witness Catalina trying to teach her palomino, Milton, to play piano with his head. Convinced Catalina has stolen Pru's idea for a new act, Pru stays up all night with Boomerang to try to come up with something else, but fails. The other PALs find Pru the next morning asleep in Boomerang's saddle.

At the opening ceremony in the evening, Lydia Sebastian sits next to Pru in the stands. The ceremony consists of multi-circus acrobatics and horse tricks. Afterward, at a marshmallow roast, Lydia interviews the PALs, and the conversation turns friendly, with Lydia revealing she comes from the one-room-schoolhouse town of Copper Springs, where Catalina also grew up until her parents took her away to circus life. When Lydia was the oldest student in school, Catalina was the youngest. Lydia promises Pru objectivity in reviewing the circuses, and reveals to Pru that Catalina has seemed sad this year.

The next morning, the PALs and Solana blow off steam by riding around the practice tent and throwing dyed marshmallows at each other. That evening, Pru is kept awake by a banging sound, and when she takes Lucky and Abigail to investigate, they find Catalina trying to teach Milton to cook French toast. Abigail reveals herself and tries to offer pointers, having taught two horses and Señor Carrots to cook, she boasts, but Catalina is only angered by the intrusion.

The next morning, the day of the clown exhibitions, Lucky and Abigail wake Pru up with a confession and two surprises. The confession is that they found and read Pru's missing letter home in which she wrote of being homesick. The first surprise, to remind Pru of home, was a wooden-board re-creation of the barn horse stalls for Boomerang, Chica Linda, and Spirit. The second surprise is an attempt at replicating Pru's mom's green bean casserole. Pru realizes that Catalina must also be suffering from homesickness, and rushes to the practice tent, where Catalina tells Pru she is quitting the circus. With help from Spirit, Pru gets Catalina to come back to the El Circo Dos Grillos gathering, where Pru surprises Catalina with a Copper Springs song learned from Lydia Sebastian.

When it comes time for Pru's exhibition act, Pru introduces the CLAPS band, with Catalina and Solana joining the PALs in a clownish performance with Chica Linda playing drums, Milton banging his head on a frying pan, Spirit banging on a piano, Solana and Abigail on a twangy marshmallow slingshot, and Boomerang painted as a green unicorn. The girls sing chaotically, and Lydia Sebastian raves to them afterward that they were the best act of the exhibition and that she will be writing all about them. Before washing off Boomerang, Pru asks the other girls, including Catalina, to make a new wish, and they all wish to remain friends forever.