Spirit Untamed is an American computer-animated adventure film directed by Elaine Bogan (in her feature directorial debut) and co-directed by Ennio Torresan. It is a spin off/standalone sequel to Spirit: Stallion of the Cimarron as well as being based on the Netflix spin-off television series Spirit Riding Free.

A video game adaptation of the film, titled Spirit: Lucky's Big Adventure, was released by Outright Games on June 1st, 2021.[1]

Lucky Prescott never really knew her late mother, Milagro Navarro, a fearless horse-riding stunt performer from Miradero, a small town on the edge of the wide-open frontier. Like her mother, Lucky isn’t exactly a fan of rules and restrictions, which has caused her Aunt Cora no small amount of worry. Lucky has grown up in an East Coast city under Cora’s watchful eye, but when Lucky presses her own luck with one too many risky escapades, Cora picks up stakes and moves them both back with Lucky’s father, Jim, in Miradero. Lucky is decidedly unimpressed with the sleepy little town. She has a change of heart when she meets Spirit, a wild Mustang who shares her independent streak, and befriends two local horseback riders, Abigail Stone and Pru Granger. Pru’s father, stable owner Al Granger, is the best friend of Lucky’s father. When a heartless horse wrangler and his team plan to capture Spirit and his herd and auction them off to a life of captivity and hard labor, Lucky enlists her new friends and bravely embarks on the adventure of a lifetime to rescue the horse who has given her freedom and a sense of purpose, and has helped Lucky discover a connection to her mother’s legacy that she never expected.

Years after Milagro Navarro-Prescott performed her trademark act in the circus until an accident claims her life during one of her performances, her living young daughter, Fortuna "Lucky" Navarro-Prescott, has been living with her aunt Cora and grandfather James in the city.

Lucky and Cora head to the town of Miradero where they will stay with Lucky's father Jim for the summer, whom Lucky has not really known of after the incident with Milagro. Upon arriving in Miradero, the pair meet local young riders Pru Granger and Abigail Stone.

Lucky goes to a corral where she sees a Kiger Mustang, the same one she saw during her train trip from earlier, trying to be manhandled by a man named Hendricks. Lucky tells Jim and Cora about the horse, thinking he can be her new friend, but Jim does not want Lucky going near the horses after what happened to Milagro. Nonetheless, Pru and Abigail help Lucky win over the trust of the horse, whom she names Spirit. After a while, Spirit trusts Lucky enough to eat an apple she offers him, as well as allowing her to pet him.

Lucky attempts to ride Spirit but he escapes from the corral and runs away, while Lucky is saved by Pru and Abigail after almost falling off a cliff. Jim scolds Lucky for disobeying him making Lucky think he has given up on her. She sneaks out at night through the forest where she finds Spirit and his herd together, but are interrupted by Hendricks and his men, who capture all the horses but Spirit and take them in by train. Knowing Hendricks and his men are wranglers, Spirit joins Lucky for his help as they enlist Pru and Abigail with their horses to embark on a journey to try and cut the wranglers off on their path by beating them to Heck Mountain. During the trip, Lucky and Spirit's relationship starts to build up as they progress along.

One morning however, Lucky wakes up and sees that the wranglers' train has made it to its stop earlier than expected, Spirit goes off on his own and is taken in by the wranglers. Determined to save Spirit, Lucky and her friends follow the train to the docks where the wranglers are boarding the horses onto a boat to be auctioned off to be worked to death. The girls arrive too late to stop the boat but Lucky manages to save Spirit and get onboard. Lucky and Spirit free the other horses and subdue the wranglers, with Spirit knocking Hendricks off the boat. Jim, Cora, and Pru's father Al show up to get the girls; and Hendricks and the other wranglers are arrested.

On their way back to Miradero, Lucky feels that she has to let Spirit go so that he can stay with his herd, and she can return home. Lucky and Cora decide instead to stay in Miradero, as Spirit is seen riding through the fields with his herd. 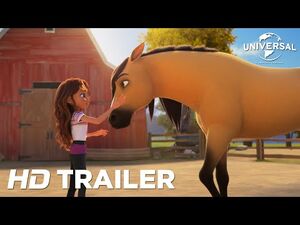