Strider is the mate of Esperanza, he has never made an appearance in the movie because of his death. (Mentioned in the start of the movie) Otherwise, he is the father of Spirit.

Strider sported a black coat with no markings. He has dark brown hooves and milky brown eyes, like Spirit and Esperanza. Esperanza describes his coat as shining blue when in the sun. He is slender and muscular.

Strider is much like Spirit, fierce and very protective of the herd, as well as responsible. As a colt with Esperanza, he is slightly playful, but alert. He and Esperanza seem to be very affectionate of one another. Strider also has a sense of dignity and pride that Esperanza humbles a bit. He is very brave and protective of all his possessions : his friends, herd and family. Unfortunately, there is no official sources is he alive or not, and if he has died, there is no official source of how did he die.

Strider doesn't seem to physically appear in the film, although there are many black horses that could be him. Spirit mentions him when he grows into a full adult, though the manner in which he is mentioned seems to suggest Strider is deceased.

In Spirit of the West

In Spirit of the West, the old Lead Mare and Stallion have perished, leaving the Herd mostly desolated. Esperanza and her mother, Alma, along with a few other horses, join Cedar's herd. Strider immediately falls for Alma's golden filly. He watches her from afar, nickers, and attempts to graze beside her. His affections are not returned until he shows an act of bravery. He and Esperanza become close friends. A storm strikes, scattering the herd, leaving him and her alone to fend for themselves. Strider blocks the filly' every move to return to the herd. She gradually ceases resisting, and they set off to find a place where they can live freely and be themselves. Strider is extremely protective of Esperanza, more than once putting himself in harm's way for her. She humbles his pride by taking the lead one day and finding water in the direction that he believed to have none. After enduring many hardships, the two find a beautiful grassland that they decide to call home. 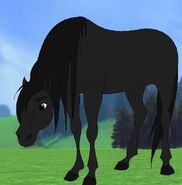 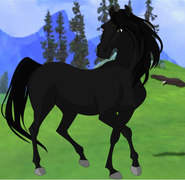